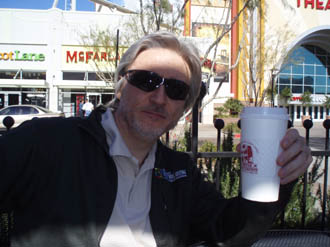 My early short fiction appeared in Interzone magazine, with reprints in various anthologies. Eventually, I made time to write stories only when invited by editors of varying anthologies; more latterly, I've simply had to decline invitations. I still love the short story/novelette/novella form.

A generation gap. A mission in trouble, on a world many lightyears from the intended destination. Will any amount of sacrifice get the survivors home?
The story appears in Mission Critical, ed. Jonathan Strahan, pub. Solaris (2019).

A Study In Shadow

Combines one of the central mysteries of Arthur Conan Doyle's life with the near-future investigations of a scientist into creating psychic phenomena using quantum technology. She is a descendant of one of Mrs Emmeline Pankhurst's combat-trained sufragette bodyguards; yet the links between her and Doyle go beyond bartitsu and jiu-jitsu, to the tension and complimentarity between analytical reason and mystical transport.
Published by the Birmingham SF Group as a chapbook for Novacon 41, November 2011

A story of Pilots, concerning destiny and love, the choices we make, and the consequences of leading a double life. Plus espionage, the infinite fractal city/world of Labyrinth, and violence at the heart of the galaxy...
The story appears in The New Space Opera 2, ed. Gardner Dozois and Jonathan Strahan, pub. Eos (2009).

Necroflux Day is a story of a young boy still at school, a teacher with a troubled past, and a bereaved parent. It's set in the strange city of Tristopolis (as featured in Bone Song and Dark Blood), but with none of the novels' characters. Not a police procedural, but a Tristopolitan tale.
It appeared in The Solaris Book of New Science Fiction v.3, ed. George Mann, pub. Solaris (2008), reprinted in The Year's Best Science Fiction and Fantasy: 2010 edition, ed. Rich Horton, pub. Prime Books.

An alternate near-future history. Jonathan Wright, reviewing the story in SFX, wrote: ...holding up the British end, John Meaney's Via Vortex is built around a gory idea of how near-instant teleportation might be achieved. If we didn't know him better, we'd be worried...
Appearing in Sideways In Crime, ed. Lou Anders, pub. Solaris (2008)

Sideways From Now is a long novella set in the near future when telepathy is enabled by qPins. The inventor of now-global telepathy is a widower, though still young, and this is his love story, taking place in Dublin, London and New York. It's also a story of intrigue set in the royal court of the Clanking City, on an endless world where the city must keep moving (on its myriad legs) or die. This story pre-empted a speculation by philosopher Daniel Dennett, which is cool...
Appeared in Fast Forward 1, ed. Lou Anders, pub. Pyr (2007)

Looking Through Mother's Eyes is a short story. Really. Usually I end up writing twelve-thousand-word novelettes or eighteen-thousand-word novellas... This time I kept it short and simple. Don't read this if you're 1) pregnant, 2) squeamish, or 3) just finished eating.
Appeared in Futureshocks, ed. Lou Anders, pub. Roc (2006)

Lost Time is the second proper outing for Rekka Chandri, later in her life, with flashbacks to her childhood in India (and featuring the suttee pavilion designed to keep the population down). (Rekka first appears in Sharp Tang, is mentioned in To Hold Infinity and Resolution, and is prominent in the Ragnarok trilogy.) This was a strange story for me, because I first wrote it a long time back, but in the wrong voice. I had to put it aside for several years before taking it out and rewriting it scene by scene, keeping virtually every scene as it was, but describing it in different words.
It appeared in Adventure vol. 1, ed. Chris Roberson, pub. MonkeyBrain Books (2005)

The Swastika Bomb is set in World War II, in a world where the genetic engineering revolution took place instead of the physics revolution. The hero is called Fleming, he introduces himself as James Brand, and Los Alamos is a biowarfare project... It's a WWII spy thriller, fun but also tragic.
It appeared in Live Without A Net, ed. Lou Anders, pub. Roc (2003), reprinted in Best Short Novels 2004, ed. Jonathan Strahan, pub. Science Fiction Book Club (2004), and in Modern Greats of Science Fiction, ed. Jonathan Strahan, pub. iBooks (2006), also in Russian translation in Fantastika Esli,(2005) and in Czech translation in Ikarie.

Blood and Verse is narrated by a poet-assassin newly arrived on an ocean world, with his own sense of ethics and a centuries-old tradition to uphold. Somehow, it became the most Zelaznyesque of all my stories.
Appeared in Aeon Magazine 1 (2004)

Entangled Eyes Are Smiling is funny, I'll have you know. It's set in near-future Chicago, with an Irish protagonist, a kind of telepathy, and a different view of science inspired by Wolfram's book on how theoretical science could model reality without using equations.
It appeared in Interzone 190 (2003).

The Whisper Of Disks

Originally called The Whisper Of Discs (due to a copy-editor unaware of computing usage), this is the story of Augusta (Gus) from her poverty-stricken childhood in present-day Oxford, through to financial and scientific eminence. In contrast, in the 19th century, her ancestor Ada Lovelace gradually destroys her life. (Gus is mentioned in Resolution and features in Transmission and Resonance.) This story is hardly SF, apart from the opening and closing paragraphs.
It appeared in Interzone 183 (2002) and was reprinted in The Year's Best Science Fiction, ed. Gardner Dozois, pub. St Martin's Press (2003)... and now here on the website.

The Dreamlode, set on a world where ideas are tangible, focuses on a young seeker after truth. It's the story of his relationship with his damaged sister for whom he'll do anything; and it's really about the power of sibling love.
It appeared in Interzone 158 (2000)

A Bitter Shade Of Blindsight

A Bitter Shade Of Blindsight features a different kind of space travel using "Scully Gates" which are nothing to do with the X-files, and are named after a real physicist. The story is set in Arizona, with a native American heroine, some discourses on Coyote the Trickster God as an aspect of physics (chaos), and a lot of information that is hidden from the reader, on the basis that it's all dark matter/energy that's behind what's going on.
Interzone 110 (1996)

Parallax Transform featured Karyn McNamara and Dart... It's an earlier version of Karyn's Story within Paradox.
It appeared in Interzone 89 (1994)

Timeslice depicted a world in which people live one day out of four. At midnight in each timezone, everyone is spat forward in time by a central system called the Scheduler. There are terrorists, anguish among families who were split up when the world went Timeshare... and a hero who's a ballet dancer.
It appeared in Interzone 75 (1993)

Sharp Tang is a bittersweet story of alien cannibalism, and is the first appearance of Rekka Chandri, a novice field explorer for UNSA. (She appears in the later Lost Time, is mentioned in To Hold Infinity and Resolution, and is prominent in the Ragnarok trilogy – Absorption includes a rewritten version of this story.)
Interzone 82 (1994), reprinted in The Best Of Interzone, ed. David Pringle, pub. Voyager (1997, UK) and St Martin's Press (1997, US)

Sanctification is about a young girl accepted into a strange monastery with far more power than you might expect. It's a tale designed to pull at your heart-strings, and in writing it, I found the beginnings of an ability to deliberately use deep emotion in storytelling.
It appeared in Interzone 69 (1993) and in German translation (as Die Heiligung) in Die Verwandlung, ed. Wolfgang Jeschke, pub. Heyne (1996)

Spring Rain was my first published story, a simple story of an old man in Japan who faces a challenge from the AI his son developed. It's really about fathers and sons. The father is called Akazawa, and his son works for a man called Sunadomari. Both men are ancestors of Tetsuo (in To Hold Infinity).
It appeared in Interzone 61 (1992).